Among various artistic works, the fan is one of the few items that managed to combine, in such an elegant manner, functional, decorative and ceremonial features [1].

Throughout a history of several thousands years, numerous testimonies certifying the use of fans by various peoples – Egyptians, Jews, Etruscans, Greeks, Romans, Chinese (fig.1), Indians, Japanese etc.- have been preserved. In this regard, mention can be made of the frescoes in the temple of pharaoh Ramses III (1186-1155 BC), of Medinet – Hahan, Egypt, in which fans are also represented [2], or the statuettes of Tanagra, Greece (4th century BC), within which fans are represented in the form of lotus leaves (fig. 3) [4]. We should also point out the fans discovered in the tomb of pharaoh Tutankhamun (1354-1346 BC) of Egypt [3] (fig. 2), or those discovered in the tomb of Ma-wang-tu, province of Hunan, China made of bamboo (2nd century BC) [5]. We could equally mention the writings of ancient authors such as Euripides, Virgil, Ovid who refer, in their works, to the usage of fans [2].

Made of different materials (wood, ivory, nacre, turtle shell, textiles, feathers), of rectangular or semicircular shape, with long handles, ornamented with gold and precious stones, these fans were used both for creating a draft of cold air during very hot seasons and as clothing accessories, used in the daily life or within religious ceremonies, representing, at the same time, a means of social differentiation. 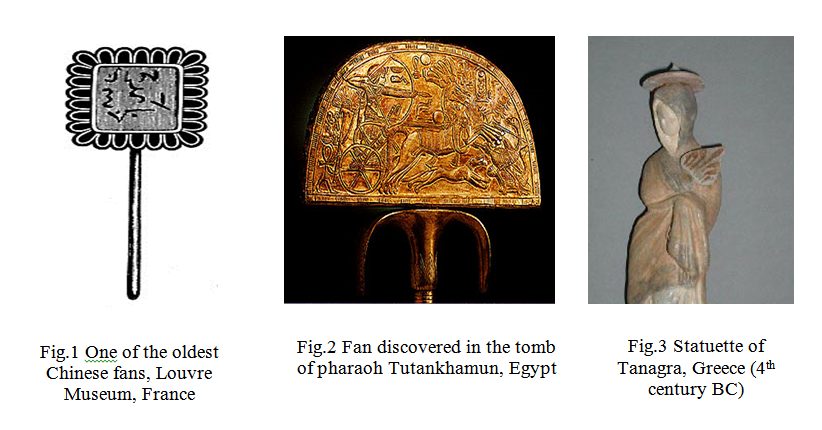 Until the 6th century BC, fans were fixed, and could not be folded.

The foldable fan, as used nowadays, was invented by the Japanese during the 6th century BC [2]. Due to intensive commercial exchanges between Europe and the East, this type of fan became widely spread, starting with the 15th century in Europe too, becoming during the next centuries an indispensable clothing accessory.

Starting with the 19th century, an important place in the category of such items is held by fans with hand-made lacery (created with the help of needles or of small hammers) [6] and also painted fans, created by famous artists such as Manet, Renoir, Pissarro, Gaugain [4].

At the beginning of the 20th century, together with the improvement of air conditioning installations, the production of fans considerably declined, at present the only countries still producing fans being Spain, China and Japan [7, 8].

Among the composing elements of fans, textiles are the most sensitive to the action of the environment factors, their decay being, in general, irreversible. The decay undertaken, in time, by textile materials in the structure of fans, is mainly due to the mechanical stress applied to fans during their normal usage and also the accumulation of dirt and other deposits throughout time.

Due to the structure of textiles, mechanical stresses determine the deformation of textile items and implicitly the application of a tension which, under certain circumstances, can cause damages. Exceeding a certain level of stress determines the modification of the mechanical properties of textiles, more precisely their diminution, generally correlated to the occurrence and acceleration of other decay processes. Mechanical stresses which occur during the usage of fans determine the concentration of the tensions in the area between the blades sustaining the textile elements, leading to the increased deformation of threads which can sometimes end up with the breaking of the textile material in these areas. When fans are folded, the very same areas are in a tensional state that facilitates the acceleration of ageing processes under the action of decay factors existing in the environment.

Within the Restoration-Conservation Centre of Iaşi two fans, dated to the 19th century, and belonging to the patrimony of Moldavia’s History Museum in Iaşi, have been preserved. The conservation interventions undertaken on these fans were customized according to the type of fan, the technique of execution and the composing materials. Made of different materials, the fans pointed out decay specific to the composing elements and to the decay factors that worked throughout time.

It is a foldable fan, having the shape of a semicircle (fig. 4), and consisting in eighteen blades on which white cotton lacery has been applied by sewing and gluing. The fan also has a thrum with ornamental role, made of cotton threads and a metal stripe.

Regarding the state of conservation of the textile item, apart from the existence of dust and dirt deposits and of reddish brown stains, present throughout the whole surface of the item, we can also notice the ageing of the adhesive used to attach the lacery to the blades. Also due to the considerable decrease of the mechanical strength of the textile element, the lacery showed numerous fractures with/without lacunae of material, both in the area of the background network and in the one of the motifs (fig. 5). 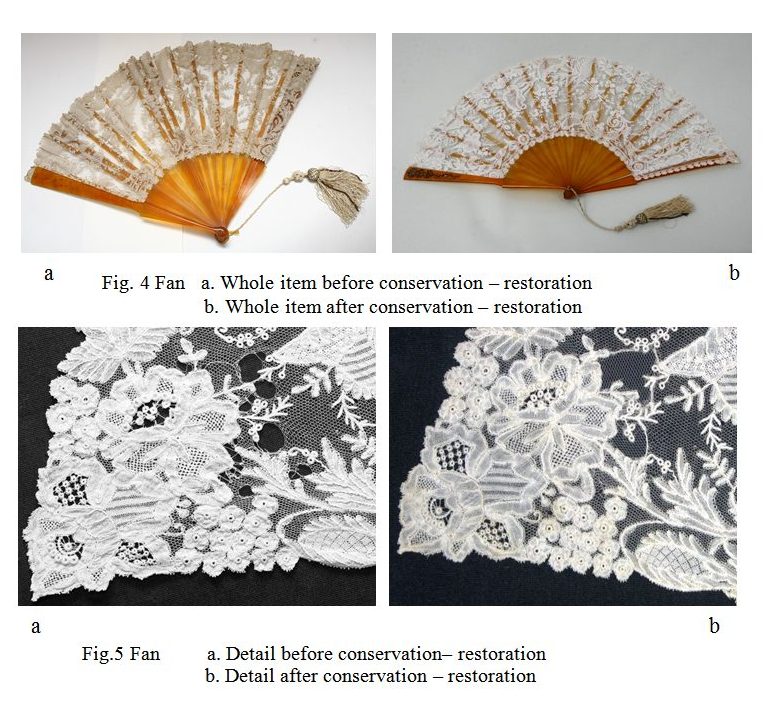 In order to undertake the conservation-restoration interventions, it was necessary to remove the lacery from the fan blades. Later on, wet cleaning and consolidation operations were done on the textile element. The lacery integrity was recreated in the areas showing fractures without lacunae of material. This was achieved by joining the material, more precisely by sewing the sides of the fracture, with raw silk threads. The reintegration of the background network of the lacery on the areas showing fractures with lacunae of material was achieved by filling in with fragments of white tulle, attached to the contour of the lacunae, by sewing with raw silk threads.

The lacery finishing operation included the application, by brushing, of a CMC solution (1.5%, in distilled water) with the role of gluing  agent, in order to provide additional mechanical strength to the lacery, as well as dimensional stability and durability in the long run, without affecting its original aspect.

The attachment of the lacery to the fan blades was done by gluing with the 5% paraloid in toluene solutions and by sewing, in the upper and lower parts, using cotton threads. The gluing solution was brushed on the turtle shell blades on which the lacery was then fixed, by slightly pressing.

The fan is foldable, having the shape of a semicircle, formed of two overlapped fabrics, attached one to the other in the upper and lower parts by sewing, and attached to the front and back of the fan blades by gluing. The fabrics are made of black natural silk. The fabric on the front of the fan shows decorative motifs achieved by sewing, with a natural silk thread, of metal spangles, of various shapes and dimensions. In the upper and lower part of the fan is sewn a decorative tatting made of natural silk, visible on the face of the fan. Blades are made of wood and show decorative motifs, painted with golden paint, visible on the face of the fan (fig. 6).

The fabric on the face of the fan showed to a smaller extent torn and fractured areas  with lacunae of material and missing/ etached spangles and detached decorative tatting embedded in the lower part (fig. 8).

In order to undertake the conservation-restoration operations, it was necessary to detach the fabrics from the fan blades.

The restoration commission decided the replacement of the fabric on the back of the fan, as it was in an advanced state of decay being preserved only 10%. A textile material with similar characteristics was used to replace the decayed fabric.

The conservation interventions applied on the fabric on the face of the fan consisted in light dedusting and wet cleaning followed by the embedding by sewing of the detached spangles and consolidation of the textile material. The consolidation was done on a tulie attached to the face of the fabric, by sewing with raw silk threads, following the contour of the decorative motifs created by the spangles. This will assure the fabric consolidated this way additional mechanical strength and dimensional stability allowing, at the same time, the visibility of the decorative motifs.

In order to allow the valorization of the fan in exhibition in safe conditions, it was necessary to eliminate the main factor of decay of the textile element which had the mechanical strength diminished (face of the fan), more precisely the elimination of the tension on the textile material in the areas between the blades, intervened upon folding. To do that, a system for the immobilization of the fan in the opened position was designed, this position presenting the main structural and morphological features. In this regard, the fan was immobilized in the opened position by embedding, by sewing a black metallic thread in the upper and lower part thereof. The attaching was done on the back side of the fabric representing the face of the fan, along the contour of the decorative tatting, so that the intervention is not visible (fig. 9). The rigidity of the metallic thread will assure the necessary sustaining of the opened position, preventing, at the same time, the folding of the fan and, implicitly, the creation of mechanical stresses of the composing textile materials.

The attachment of the two fabrics on the face and back of the fan blades was done by gluing with 5% paraloid in toluene solution and the sewing in the upper and lower part with raw silk threads, simultaneously to the embedment of the decorative tatting.

The above cases studies point out, one more time, the fact that although the textile items are part of the same category they cannot always be treated the same way. Each item is a unique case, which needs to be known in its specific aspects, the applied conservation methods requiring adaptation and customization.

The restoration treatment of a heritage item is a “surgical” intervention which most of the times involves the sacrificing of “sick” elements or of certain parts of the material integrity of the item. Complying with the authenticity and integrity of the heritage item on which such interventions took place is one of the basic principles of the conservation-restoration process. Sometimes though, the attempt of assuring, at the same times, both durability and integrity of an item can be a rather impossible objective. In certain critical circumstances, imposed by the advanced phase of decay of the material support, in order to save the item, the compromise of sacrificing as little as possible from its material integrity is accepted. The decisions as for what can be replaced and what must be preserved are, in most cases, difficult and disputable. We think the optimal solution is the one of sacrificing the minimum possible, in order to save the item, and of preserving testimonies – photographs, samples – of the elements which were removed or replaced.

The paper presents the conservation-restoration interventions applied to the textile components of certain fans in the patrimony of Moldavia’s History Museum in Iasi, dated to the 19th century. Fans pointed out decays specific to the composing materials and the decay factors that acted throughout time. The applied interventions were customized according to the specificity of each fan.