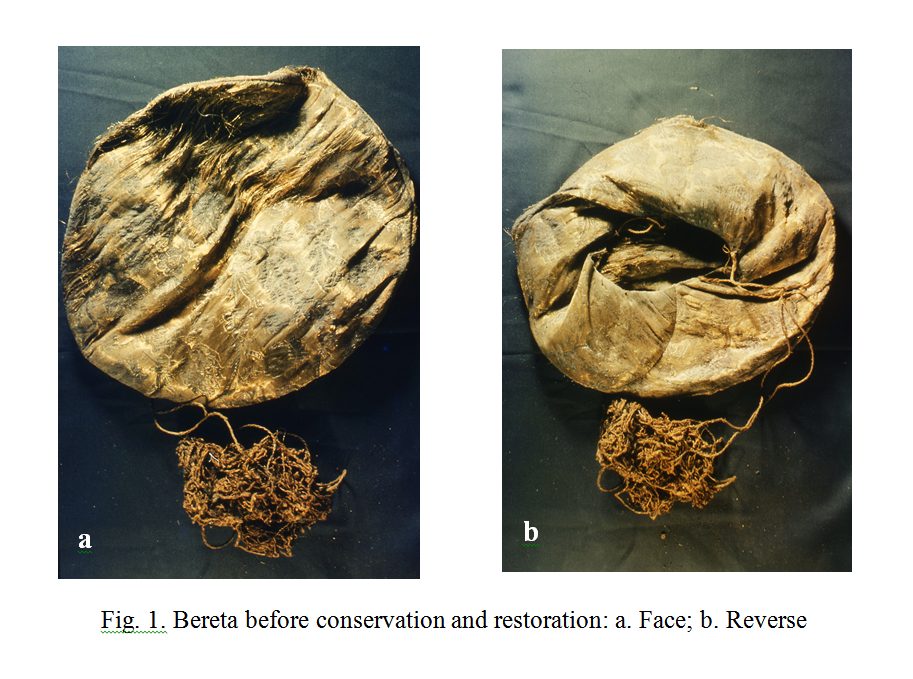 Thanks to the archaeological research conducted at the Sf. Sava church in Iasi, Romania, by Voica and Neculai Puşcaşu archaeologists, a head garment was discovered, alongside other clothing items, in a crypt situated in the western part of the royal doors of the iconostasis. The crypt belonged to a female character, deceased an early stage of her life, who most certainly was part of a noblemen family or one of distinguished merchants. The analysis of the gathering of archaeological data led to the dated of the tomb back to the 17th century after the construction in 1625 of the respective religious edifice.

The archaeological works research were affected by the March 1977earhhquake that case damage to the structural elements  and the funeral content of the crypt in which the textile was discovered. The access being blocked by the damage cause to the building, the sampling of the objects from the digging site was only possible after about a month from their discovery, period in which the pieces suffered additional damages that require the expansion of the range of interventions during the course of the restoration-conservation process. The action of the degradation factors from the burial ground, the change in the microclimate when the crypt was open and the maintenance of the pieces for a month in the microclimatic conditions of the archaeological site , resulted in major changes in the physical-mechanical and chemical characteristic of the constituent materials. For these reason the clothing items were in an advanced state of decay when it was collected by Conservation –restoration Centre.

The head garment was made from a fabric of silk, silver and gilded silver threads and it looks like a hat without brims, with high truncated dome, narrower at its base and wider at the top. The two tailoring elements, the round bottom and the lateral strip shaped like a sector of a circular crown, were sown with silk threads. On the margins, around the neck area, two silk strings are sown that each have a tassel on their end (fig 1, 2).

The head garment was made from a fabric of a complex structure, manufactured using two warp systems and four weft systems. From the point of view of its technological making, the fabric belongs to the category of double fabrics with stitching weft and lining weft. [1]. In this case, the textile structure consist of two overlapping layers created from two sample fabrics (made using one  weft and one wrap) stitched  in a double fabric with the aid of the stitching weft. On the other side of the fabric, the lining weft that connects with the texture of the inferior layer is visible.

The fabric of the head garment was created using two systems of wrap threads, made from silk threads, and four systems of weft threads inserted in the structure of the fabric across its full width – two silk threads and two silver and gilded silver threads, with a circular cross-section (fig.3).

The two system of wrap threads (fig 3-1 and 4) connect the systems of silver and gilded silver weft threads (fig. 3-2 and 5) to form the two constituent layers of the double fabric (fig 3- A and B), layers that a interrelate through the silk stitching weft (fig 3- a and b). On the other side of the double fabric, silk lining weft is visible (fib 3-6) that connects to the silk warp of the inferior layer (fig 3-c).

There are floral ornaments on the fabric, created using the silver thread weft, framed in the decorative field made from the gilded silver weft, which gives the fabric a shiny appearance. Due to the structural particularities specific to this complex fabric, the silver/gilded silver weft threads are alternately positioned either on the surface of the fabric  to form the floral ornaments/the decorative field, or on the inside of the fabric, case in which they are invisible on the surface.

The alternation of the component wefts is 1/1/1/1.

The action of the degradation factors from the burial ground and the digging site caused, first of all, the damaging of the silk warp threads and the advanced corrosion of the silver weft threads. The gilded- silver threads are much better preserved due to their structural characteristics.

On the other side of the fabric, inside of the bonnet, deposits could be observed formed by the decomposition of organic matter from the burial ground, salt deposits and deposits from the digging (fig. 5a).

The advanced stat of degumming of silk filaments enhanced the degradation of the silk threads, which was more advanced in the case of warp threads (fig.6) [2]. For this reason, the breaking of the silk threads in certain areas of the fabric has generating the breakup of the contexture and the partial detachment /breaking/loss of the gilded silver/silver/silk weft threads from these areas. Also, the silk tassels had an undefined shape due to the damage suffered.

The textile material was deformed (folds and curls) at the bottom of the bonnet, due to the sustained damages, as well to the specific textile structure. The great extent of the metallic threads in the structure of the fabric that forms two of the weft systems, inserted on the whole width of the fabric, has generated damages due, in this case, to certain mechanical incompatibilities  of the two materials – silk threads and metallic threads. The different characteristic of these threads , their elasticity and wettability, have determined from the point of view of dimensional stability distinct reactions to the environment conditions, which generated additional tension in the silk threads and, implicitly, their deterioration.

The cleaning treatment was realized by undergoing a succession of operations specific to this kind of objects, but particular according to the characteristics of the treated textile materials and to their preservation state [3, 4].

In the first stage, the mechanical, dry cleaning of the outside area of the bonnet was executed. To carry on the cleaning inside the bonnet the undoing of the piecing of two tailoring elements was required. So, the textile material was placed in an horizontal position. The two tassels were also detached.

After completing the hydration and relaxing the silk threads it was noticed that the fabric of the bonnet had a tendency to bend, forming a convex surface, with the front of the fabric  (mostly formed out of metallic threads) oriented towards the exterior of the bend and with the back of the fabric (mostly formed out of silk threads) oriented towards the interior. This phenomenon, caused by the structural characteristics of the double fabric mentioned earlier, constituted an inconvenience in implementing the next stage of treatment, namely the wet cleaning. By immersing the fabric in a humid environment there is an intensification of this bending tendency of the fabric. This is explained by the different changes in dimensional features of the back and of the front of the fabric in a wet environment – the back of the double fabric, composed of silk threads, in contrast to the front of the double fabric, composed of metallic threads characterized by dimensional stability in wet environment. To reduce this deformation tendency of the textile material during wet cleaning, the textile fragments were temporarily secured between two terylene nets, using long stitches, insisting on the areas in which the fabric was torn.

The wet cleaning was done in a bath with an infusion of Radix Saponaria, by gently dabbing the textile material. The intervention resulted in the removal of salts, dirt deposits from the digging and the deposits of organic matter decomposition from the archaeological site (fig. 5b)

Repeated rinsing cycles followed until the textile material was brought to a neutral state. The drying of the fabric was done on absorbent bedding at room temperature.

As an effect of removing the deposits and the corrosive products, the metallic threads restored the original shine of the fabric (fig. 4b).

After completing the cleansing intervention, the conservation state of the two textile components of the bonnet was evaluated and it was observed that they had a decreased mechanical resistance due to the areas in which the fabric was torn and that there was a partial loss of silk, silver and gilded silver threads. Consequently, it was decided that they would be consolidated on a silk substrate through sowing, using fine threads of silk. In the areas in which the fabric of the bonnet was broken, it was insisted on the arrangement of the original threads in their initial position and their fixation on the consolidation fabric by sowing them with fine silk threads. In the areas in which the original threads were missing, the consolidation substrate was visible, creating certain dissonance from the point of view of chromatic and structural unity of fabric. To diminish this negative effect, the missing threads were replaced by inserting new silk threads in the structure of the fabric, painted in the color of the original threads. These new threads were fixed on the consolidation substrate by sowing using fin silk threads (fig.7).

After completing this consolidation stage, it was noticed that the deterioration degree of the fabric, more evident on the bottom of the bonnet, imposed an additional compensation of the losses in the material made from silver, gilded silver and silk threads. This compensation was created  by the additional consolidation of the two components of the bonnet on a second cotton cloth substrate, by sowing with fine silk threads.

After the consolidation, the two components of the bonnet were assembled in their original form, following their initial sowing technique.

The original shape of the tassels could not be reconstructed because there were no reference that would have made this operation possible. For this reason, after the conservation intervention, the two tassels were sown back on their initial position (fig.8)

Through the implemented interventions, the progressive decay processes present when the piece was collected were stopped and, at the same time, the structure of the object was consolidated. Moreover, the reconstruction of the object, the restoration of its original shape and shine, led to the recovery of its integrity, the heritage item becoming accessible for museums activities.

Each conservation-restoration intervention  represent a particular case which must be adapted to the specificity of the heritage item, from the point of view of materials contained, as well as from the  damages that it has sustained . 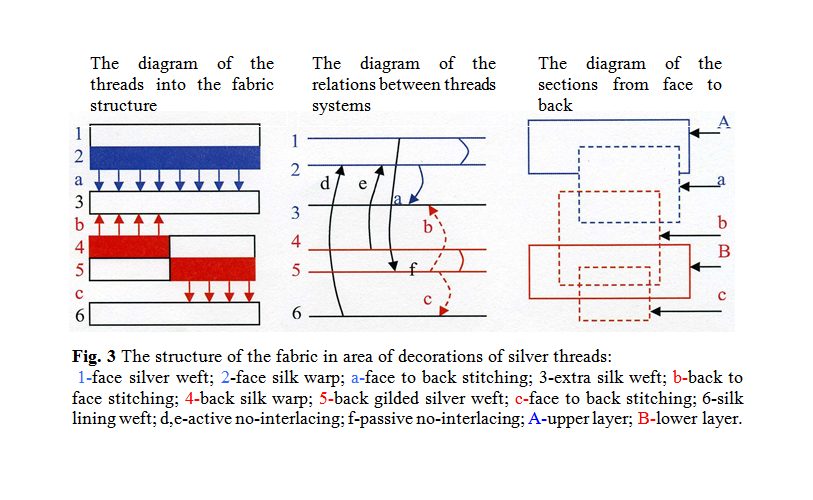 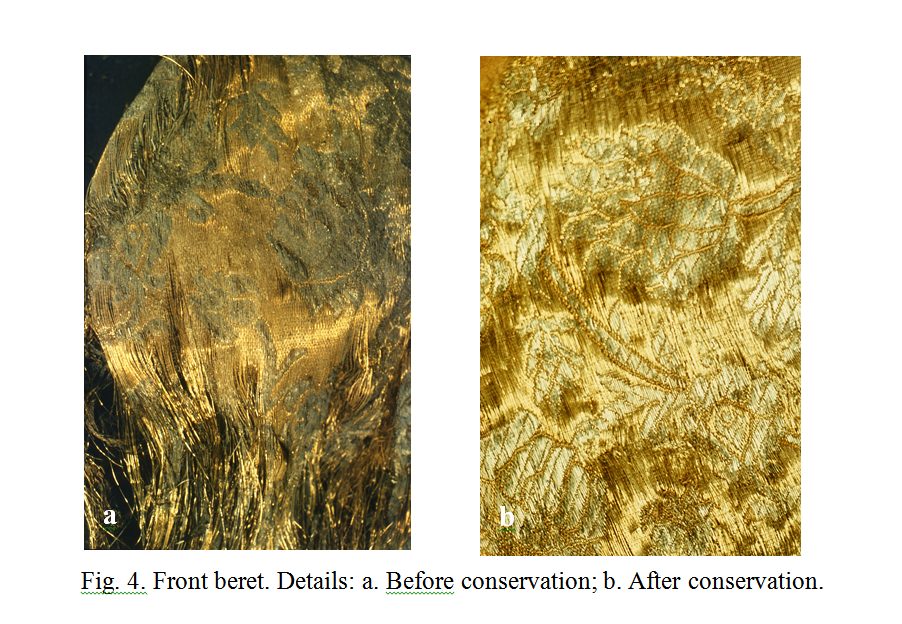 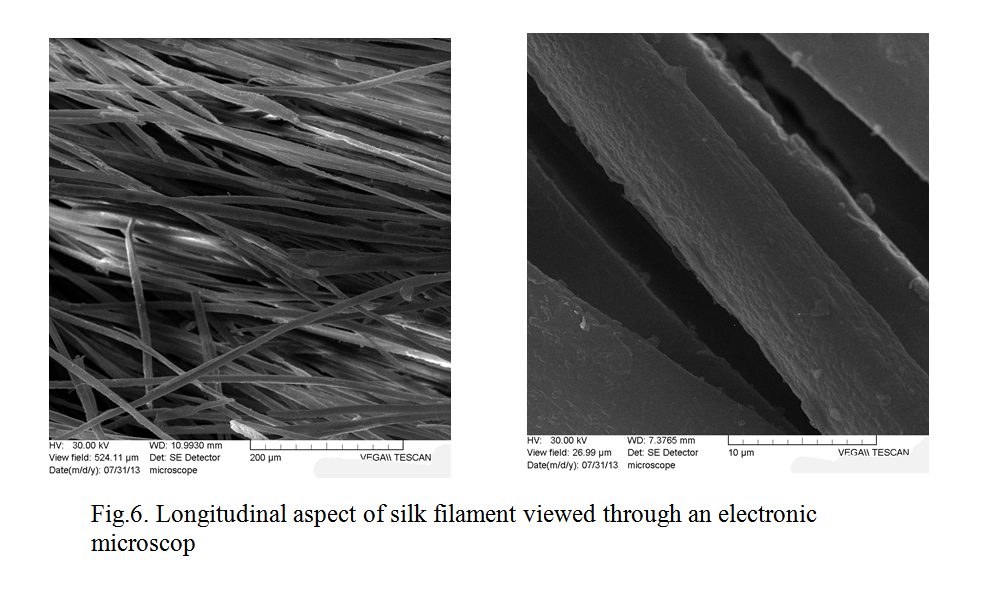 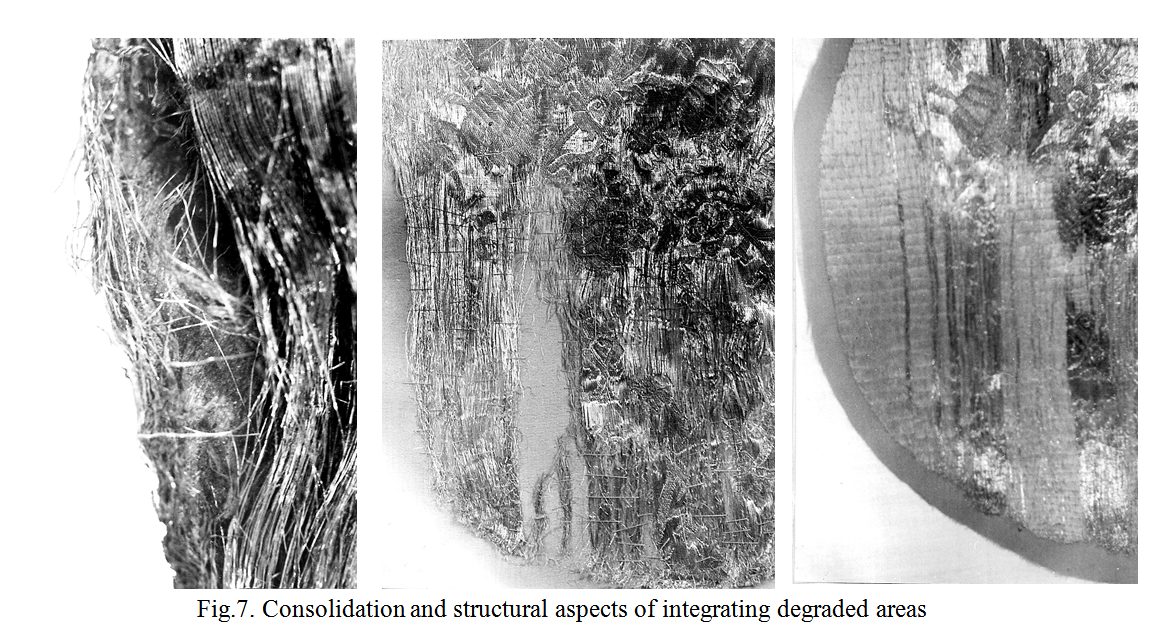 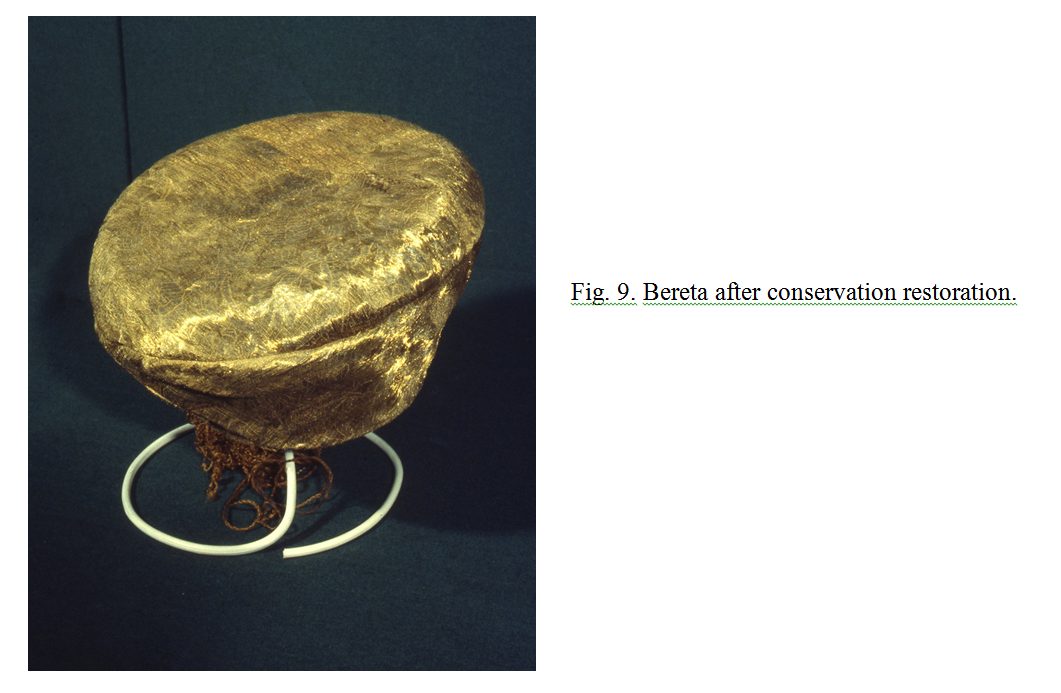