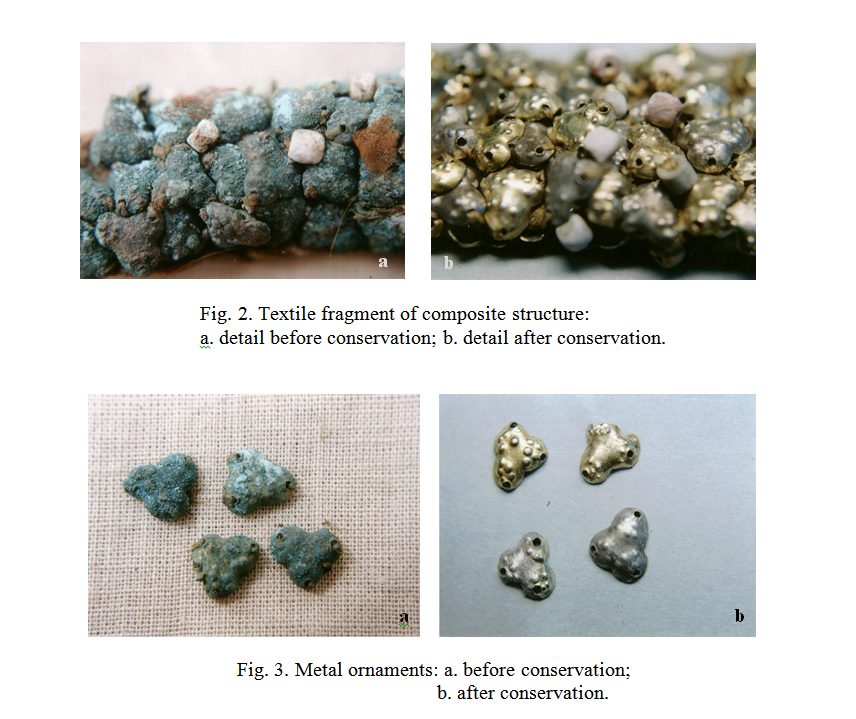 Abstract: The work describes the conservation treatment of two textile fragments from the archaeological excavations carried out at the Capriana Monastery, Republic of Moldova, dated to the 16th century. The fragments are composed of natural silk tissue, metal decorations (of silver and gilded silver) and aragonite beads (calcium carbonate). The conservation treatment was applied correlating the properties of each component material to the state of preservation upon submission to the laboratory and consisted in cleansing and neutralizing treatments and consolidations by sewing of archaeological fragments on a new textile support.

The conservation of textiles discovered in archaeological excavations always raise difficult problems because, due to the specific underground conditions, the textiles have suffered an alteration of their structure.The identification of the best solution as for the conservation of this type of textiles is even more difficult when the items include both organic and inorganic materials (textile fibers, metal, ceramics, wood etc.) in various states of preservation. In such circumstances, the option for a particular treatment is established pending on the correlation between the properties of each material and the state of preservation upon its submission to the laboratory. When in archaeological environment there are some metals (silver or copper), metal salts formed act as biocides, inhibiting microbiological degradation.

We had to deal with such problems in the case of the conservation treatments carried out on two textile fragments discovered during the archaeological excavations of Căpriana Monastery, Republic of Moldova, and which were dated to the 16th century (fig. 1). The fragments are composed from a natural silk fabric on which are sewn, with natural silk threads, metal ornaments of silver and gilded silver, of three-cusped shape, and aragonite beads (calcium carbonate), of cylindrical shape. The beads, due to the degradations undergone in archaeological environment, had different colors. Also, on the fabric of one composite fragment was attached a brass pin.  Given the composing materials, the shape of metal decorations and the presence of pins, we suppose these fragments belong to ornamental objects.

The metal ornaments showed massive deposits of copper chlorures and carbonates and, in lesser amounts, silver sulphurs (fig. 2a, 3a). These corrosion products migrated both on the aragonite beads (fig. 4) and on the silk fabric (fig. 5a), determining a certain rigidity of this composite structure. The presence, in a considerable amount, of copper corrosive products can be explained by the high percentage of copper in the silver-copper alloy.

The beads showed an exterior compact structure, of a shiny aspect, interrupted by several exfoliation zones of the superficial layer, making thus visible the internal spongeous structure, with voids of various shapes and dimensions.

Chemical analyses revealed the sensitiveness of the composing material (calcium carbonate) in inorganic acids, acetic acid and complexon (C10H14N2Na2O82H2O). The immersion for a long while of the beads in water or in the solution of Radix Saponaria, at room temperature, resulted in the desintegration of the composing material in the areas of the lacunae of the shiny and compact superficial layer.

Due to the decay undergone, in time, in the inhumation environment, the beads had different shapes and dimensions. A possible explanation of these transformations can be both the presence in the archaeological environment of decaying organic and corrosion products, and the increased solubility of the composing material (calcium carbonate) (fig.4).

The natural silk fabric, of brown-ochre colour, which forms in fact the support of this composite structure, showed an advanced state of scouring. Due to the decay, the mechanical resistance was much diminished and chemical tests pointed out an increased solubility in alkaline solutions – for instance, the immersion in the ammoniac solution with a pH>8 also determined a modification of the superficial features.

The research of the decay of composing materials (metal, textile material, aragonite) pointed out their different behaviour upon the application of the above cleansing solutions.

It was thus noticed that the aragonite beads, due to the decay undergone in time and increased solubility, cannot be immersed in any of the above solutions. For this reason, in a first phase, in order to avoid the possible risk of causing decaying alterations during the cleaning treatment, we tried to isolate the beads from the immersion environment by applying a solution of paraloid, nitrolac or soluble Nylon. Unfortunately, none of these solutions has achieved the expected results.

Taking into account the sensitiveness of silk to the alkaline solution for the removal of the corrosion products, a complexon solution with a pH=5, 5-6 was applied. The treatment was tested on detached metal ornaments and on small fragments of fabric, and it needed to be applied for 1 hour. This treatment removed both the corrosion products from the silk fabric and those on the metal ornaments, without causing new decay (fig. 2b, 3b, 5b, 6b).

The beads were mechanically cleaned.

After the cleansing and neutralizing, the structure consisting in metal ornaments sewn on the silk fabrixc was consolidated by sewing on a new textile support in order to provide an increased mechanical resistance. Then the beads were sewn back using the original attaching technique (fig. 7).

Subject to such a conservation-restoration treatment, the textile fragments preserve, in order to be transmitted to the future of humankind, valuable information as for the technology, aesthetics, fashion, recreating thus interesting aspects of old civilizations. 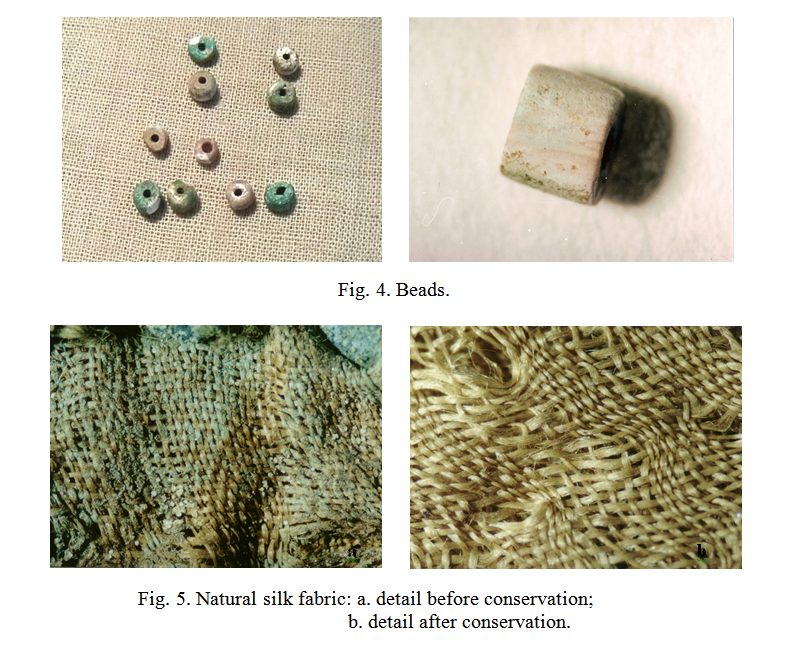 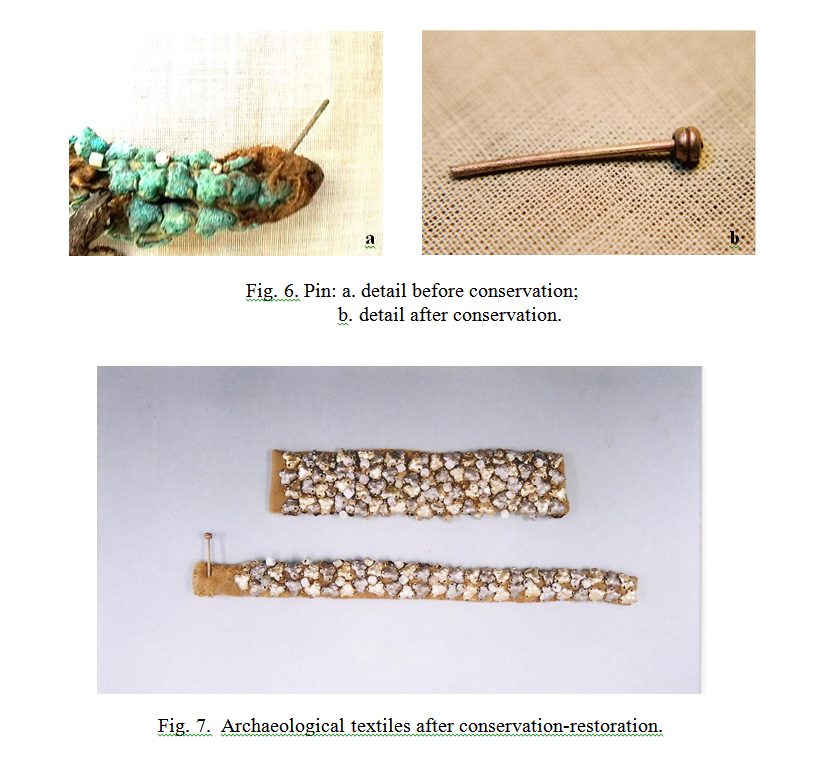