Ornamentation with beads remains one of the most appreciated methods of customizing and embellishing the textile materials. For this reason, the creation of these materials has been a constant concern for both textile professionals and lovers of beauty. The bead ornamenting of textile materials can be done either by integrating the beads into the textile structure, simultaneously with its manufacturing (by weaving/knitting/ crocheting /interweaving bead bearing threads), either by applying beads on the surface of a textile surface previously manufactured, by sticking them with adhesives or by attaching them with a textile thread, using a needle/crochet. The paper presents theoretical aspects related to the ways of making textiles ornamented with beads. Are exemplified the weaving of bead bearing threads and embroidery technique using bead bearing threads and point called chain stitch.

Fashion has always been a catalyst for the creativity of textile specialists in the creation of new clothing items and sophisticated textile materials. Among them, textile objects ornamented with beads, designed especially for fashionable vestments, enchanted the eyes by the beauty of the decorative motifs and the harmony of colors. For this reason, the creation of these materials has incited, over time, in equal measure, innovative spirit of textile professionals and lovers of beauty.

The sense of beauty and the wish to ornament vestment textile items have been manifested in the history of mankind since times immemorial. One of the first testimonies of bead embroidering is represented by the beads found at Sungir (Russia) dated to 30000 BC. Arranged in horizontal rows these were supposedly sewn as decorative elements on the leather or fur vestments [1].

Another testimony is represented by a textile fragment discovered in a tomb of the Qau el-Kebir region, in Egypt, dated to 2400 BC. This fragment resulted from a dress made of bead netting material, with beads of various colors strung on textile threads (fig.1). 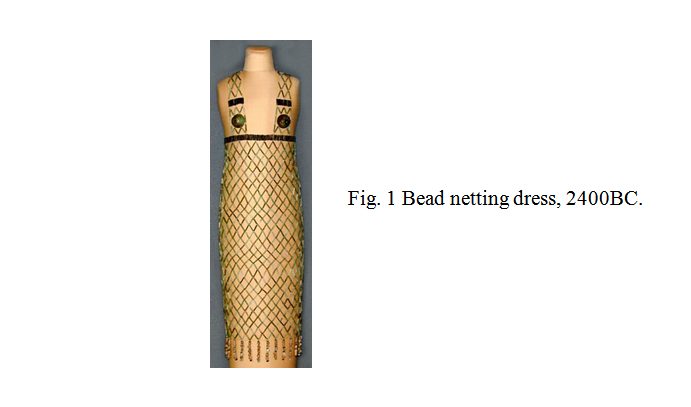 Researches carried out by the professionals of Textile Conservation Centre in London, regarding the identification of the original modality of embedding the beads in the form of a net with rhomboid motifs, led to the restoration of the above dress [2].

Textile objects adorned with beads, had for some cultures, magical protection and spiritual significance. Among them we mention the veil– an essential element of the funeral ritual – which, sometimes, covered entirely the Egyptian mummies dated to the period between 712 – 432 B.C. These textile materials, ornamented with colored motifs representing various symbols with a role of good luck charm, used to have both a decorative function and a protective one for the mummy (fig. 2) [3].

Later on, articles of clothing adorned with beads were used mainly for dressy attire and became a a symbol of social status, power and desire for luxury and pomp of the dominant classes (fig. 3,4). 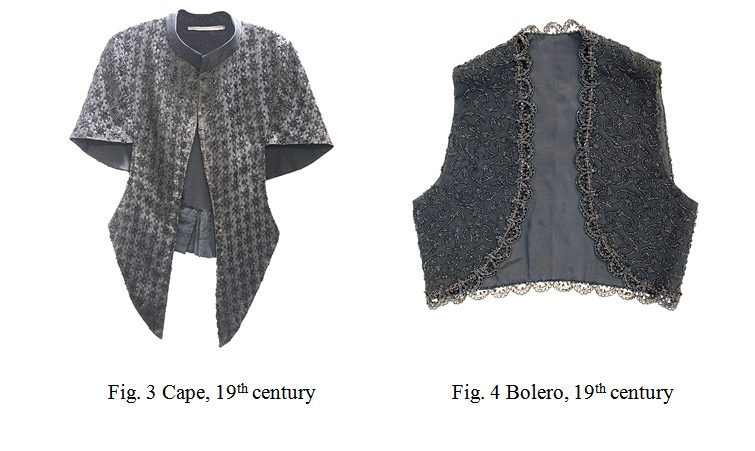 The bead ornamenting of textile materials can be done either by integrating the beads into the textile structure, simultaneously with its manufacturing, either by applying beads on the surface of a textile surface previously manufactured, by sticking them with adhesives or by attaching them with a textile thread using a needle/crochet.

2.1 Integrating the beads into the textile structure simultaneously with the manufacturing of the material can be done using bead bearing threads in the making of the woven/crocheted /knitted structures (fig. 5). 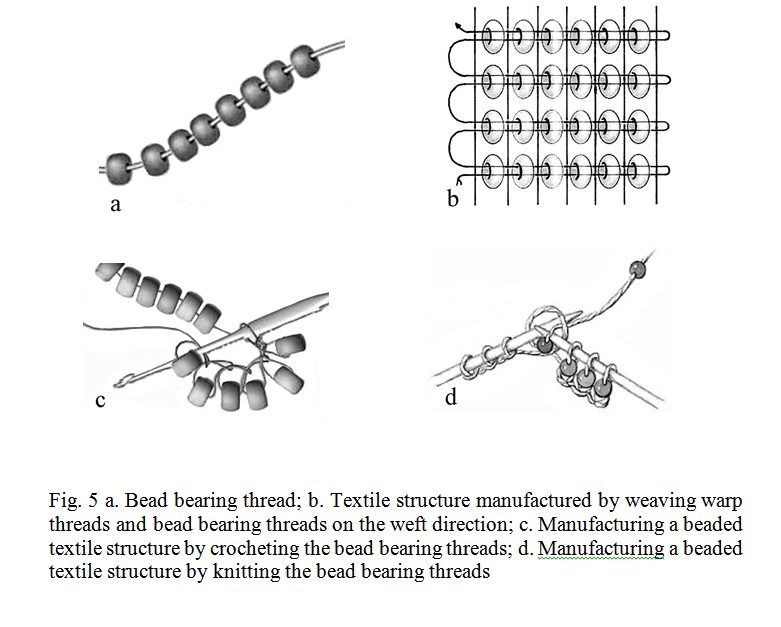 Regarding the operation of weaving, in order to make beaded decorative motifs, bead bearing threads can be used, either on the weft direction or on the warp direction. Using them on the weft direction does not require, from a technological point of view, any constructive changes of the weaving devices, weaving principle remains unchanged. On the other side, the use of bead bearing threads on the warp direction requires the use of special devices among which the double reed and the bead bearing warp thread feeding system [4].

The double reed is formed of two distinct elements – the upper reed and the lower reed – which are overlapped on a certain area, allowing the raising and lowering of the bead bearing threads (fig. 6): 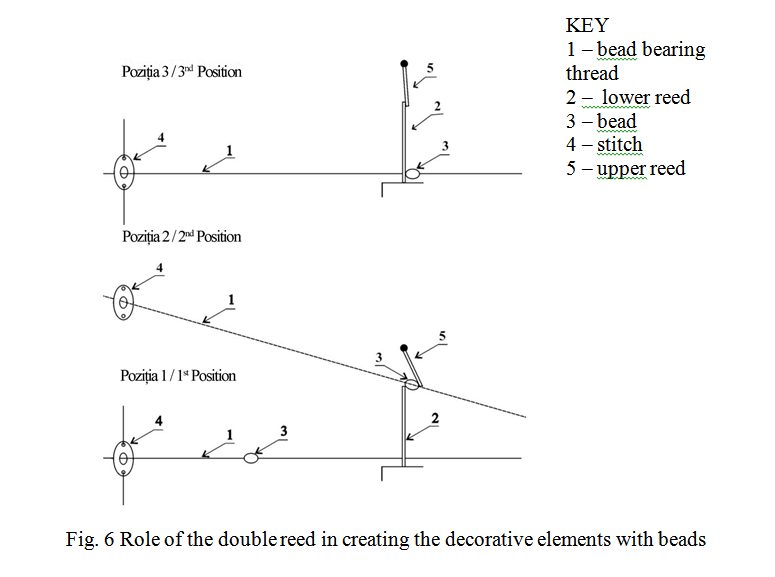 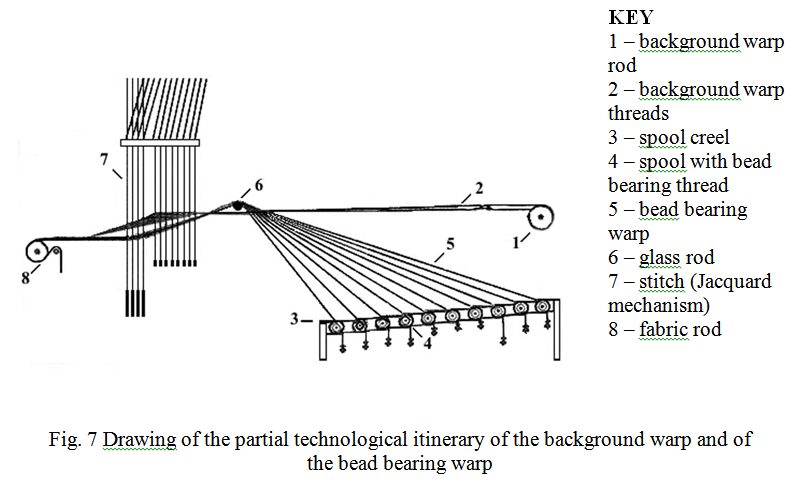 This type of bead-ornamented fabric had a rather ephemeral existence, being manufactured on manual looms, probably after 1885, until the end of the 1920s [5]. In this regard, mention should be made of the existence of a considerable collection of natural silk fabrics with bead ornaments, created at the end of the 19th century by the SCHULTZ & CIE Company and exhibited within the Textiles Museum in Lyon.

The patrimony textile items are truthful testimonies of the technical virtuosity of their creators, preoccupied, constantly, of the need to create new fabrics for the outerwear fashion.

This is also the case of the textile vestment item – Cape, inv. No. 2432 (fig.3), dated to the 19th century, belonging to the patrimony of Moldavia’s History Museum in Iaşi. The cape is made of a black fabric whose surface was ornamented with rhomboid motifs made of facetted black beads (fig. 8a).

The record sheet of the item specifies that the cape is made of bead embroidered silk. Preliminary researches of the restoration process, carried out with the use of the stereomicroscope, pointed out that the beads were not embroidered to the textile material, but were embedded into the surface hereof during the weaving process, by means of the threads onto which these beads were strung. The beads were strung on bead bearing threads which at the same time were composing elements of the warp of the fabric. In the area of the decorative motifs these warp threads with the beads they sustained were floating together on top of the fabric, while in the areas without decorative motifs, they were woven in the structure of the fabric together with the other threads (fig. 8 a,b).

2.2 Attaching the beads to the surface of a textile material previously manufactured can be done using various adhesives (by gluing) or using textile threads, which play the role of fixing the beads on the surface to be ornamented (by sewing with a needle or by embroidering with a crochet).

In 1865, Louis Ferry Bonnechaux (Luneville, France) used the technique of embroidering with a crochet and the chain stitch embroidery point in order to attach to the surface of the tulle-like textile material, under the shape of decorative motifs, beads threaded on a bead bearing thread. The specificity of this method is represented by the fact that the chain stitch point is done on the back side of the textile material. In this case, it does not play anymore the role of creating decorative motifs, but only of fixing the beads ornamenting the front side of the textile material (fig. 9) [6]. 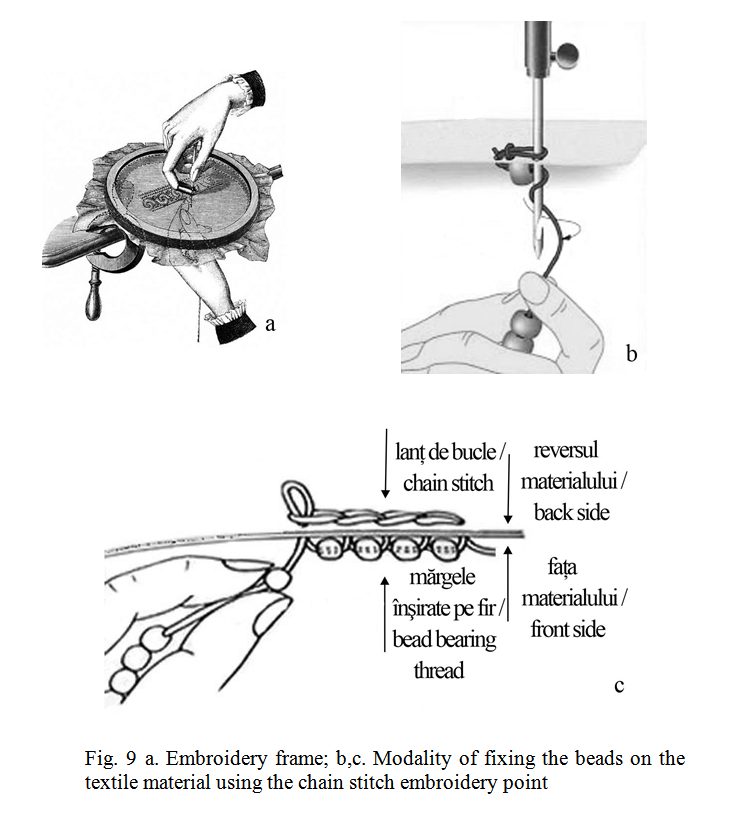 When this technique is used for ornamentation with beads the textile material representing the embroidery support is drawn on a loom (embroidery frame), being set backside by the embroiderer (fig. 9). The thread on which the beads are threaded is placed under the loom and easily drawn with the left hand. The crochet is inserted with the right hand from top to bottom through the material, piercing it. It grasps, with the hook, that portion of thread between two beads, and pulls the embroidery thread upwards through the material.

Another testimony of the fabrics adorned with beads is a textile piece of clothing – Bolero, Inv. No. 2120 (fig. 4), dated to the 19th century from the patrimony of Moldavia’s History Museum of Iaşi. The textile material forming the front of the bolero is made of black cotton tulle ornamented with sinusoidal motifs of black glass beads.

The research of the decorative motifs showed the fact that the beads were attached to the surface of the tulle using the embroidery technique. Also, as a sewing method, the embroidery point called chain stitch was used, visible only on the back side of the tulle (fig. 10).

Ornamentation with beads remains one of the most appreciated methods of customizing and embellishing the textile materials. Through its brightness and the capacity to create the most diverse effects, it continues to be indispensable to the industry of luxury products or the entertainment world.