The mineralization of textiles in an archaeological context – case study

1. General considerations regarding the preservation/degradation of textiles in archaeological environments

The archaeological textiles are preserved in the most varied environments, from the peat bogs of the northern Europe to the dry deserts of Egypt, from the frozen Siberian tundra to the prehistoric salt mines of Hallstatt. In other cases, circumstances not linked to the soil or climate features are responsible for certain forms of preservation – mineralized textiles, carbonized textiles, imprints on pottery, on metal or ground surfaces, all of which providing valuable and significant data.

The degradation mechanisms of textiles in the archaeological environments are complex, the type of degradation and the state of preservation being dependent on both the chemical structure of the fibers and the microclimate of the laying site. The formation of the archaeological microclimate depends on several variables – temperature, relative moisture, pH (acidity-alkalinity), rH (oxidation-reduction), salinity, the presence of heavy metals etc. The variables interact with each other, determining the amplitude and the speed of the textile degradation process – while one factor might suppress the degradation, another could negate the suppressing effects of the former.

Although the textile fibers are attacked by chemical products in the soil, the main degradation agents are the biologic ones – fungi and bacteria. The fungi are active only in aerobe conditions, while the bacteria are active in both aerobe and anaerobe conditions. The soil characteristics play an important role in the degradation of a textile piece due to the inhibiting effect that certain soil compounds might have on the activity of several types of microorganisms, slowing thus the degradation process. The soil characteristics influence also the preservation of certain types of fibers. Thus, the protein-based fibers are better preserved by the acidic soils, while the cellulose-based fibers are better preserved by the alkaline soils.

When the laying time within the archaeological environment is longer, the presence, absence or inactivation of the degradation agents is particularly important. In the period immediately following the burial the speed of degradation is high and for the specific material to resist in the underground conditions, the degradation speed must be lowered or stopped, by creating a set of conditions favoring the inhibition or complete suppression of the degradation factors activity. If these conditions are not met, the material will undergo either a modification of structure, reaching a state that is in equilibrium with the underground environment, resulting in its survival, or a complete decomposition. While usually the altered state preserves the original outer shape of the object (a process known as pseudomorph replacement), in the case of the complete decomposition the object becomes a shapeless mass [1,2].

Within underground environments, where the protein/cellulose-based fibers are in contact with a metallic artifact, the contact area between the metal and the textile generates a microsystem in which the textile degradation and metal corrosion processes interact physically and chemically.

In the complex solutions within the natural geology, the values of the reduction-oxidation potential and the pH depend on the interaction of several variables, which emerges at a given moment, i.e. the reduction-oxidation reactions, the hydrolysis or dissociation reactions occurring between the present minerals (ferrous and ferric compounds, sulphites, silicates, carbonates, etc.), the organic matter, the atmospheric compounds (CO2, O2, H2S) and water. The pH and rH alterations may be determined by the rainwater and dissolved gasses influx, the reaction with the local minerals, sediments and soil compounds, the biologic activity. The degradation of the fibers by the airborne water and the dissolution of the degradation products in the solution surrounding the metallic artifacts, which permeates the fibers, produce a major alteration of the geochemical environment, by reducing the pH and increasing the oxidation potential. The new conditions will cause the corrosion of the metal and the production of inorganic products as mineralized textiles (also known as pseudomorph textiles) and corrosion crusts [3].

The mineralization of textiles represents the combination and/or the replacement of the organic matrix of the textile fibers by an inorganic matrix. The mineralization process requires a wet environment, a corrodible metal and optimal contact between fiber and metal. The literature mentions copper, iron, lead and silver as the main metals participating in the pseudomorph replacement processes of the textile materials in archaeological context [3] .

In an archaeological environment, the pseudomorph textiles are produced in the context of chemical ageing, through the interaction occurring between the corrosive solutions and the processes of fibers degradations and metal corrosion. The metallic ions permeate the fibers and attach to the polymeric chains, reacting with the accessible water molecules and HCO–3 groups, to form precipitates inside the fiber, replacing thus the organic matrix of the fibers. The pseudomorph structures replicating the textile fibers are larger than the original fibers.

The knowledge of the pseoudomorphosis chemistry is very important and necessary to take the adequate decisions regarding the preservation and conservation of both the pseudomorph and the metallic artifact it is associated with.

The mineralized textiles might exist in two forms: positive or negative imprints.

In order to form a positive pseudomorph structure, the concentration of metallic ions should be small enough to allow the penetration of the ions into the fiber. During the formation of the positive imprint, the metallic ions permeate the fiber and react with the organic matrix. This mechanism produces new linkage cores, allowing thus other ions to become fixated inside the fiber. In this manner the corrosion products replace gradually the organic matrix of the fiber, resulting in a replica of the textile material, made wholly or partially of corrosion products (fig.1). Such positive imprints can provide information regarding the type of fiber, the torsion and the fineness of the thread or the texture of the textile material. 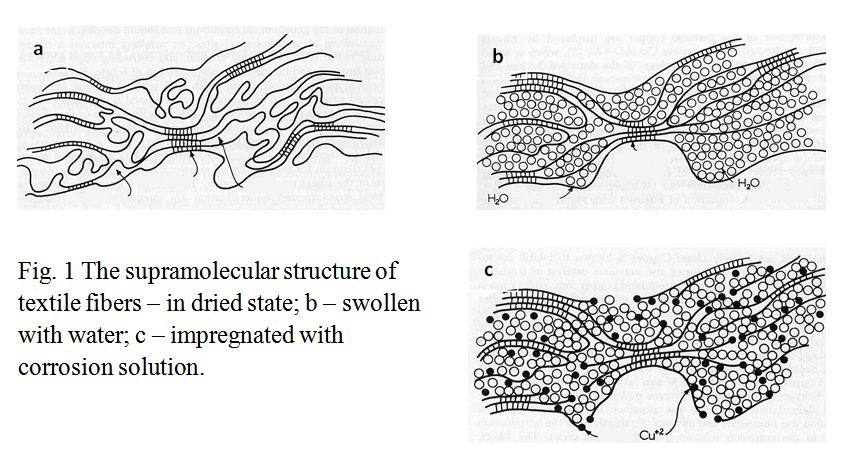 During the formation of the negative imprint, the metallic ions in the immediate vicinity of the fiber surface are in high enough concentration to overcome the solubility limit, thus creating the conditions for their precipitation on the surface of the fiber, as corrosion crust. The physical, chemical and microbiological processes degrade the fiber under the crust, resulting tubular cavities preserving in negative impression the surface of the degraded and disappeared fiber [3,4].

The degree of mineralization of the textile fiber may vary significantly within the same fragment of textile material. The variables involved include:

The negative imprints appear mostly in the case of iron artifacts, while the positive imprints appear in the case of copper alloys. Unlike the copper alloys, the iron has low biocide properties and consequently could not protect the fiber against the microbiological degradation. Therefore, in this case, the probability of positive imprint formation is low, except in the case the iron ions are capable to permeate the fiber and replace the organic matrix, which occurrence is frequent in highly alkaline or acidic underground environments. The relatively high corrosion speed of iron, together with very low solubility of the iron salts, will prevent the formation of the positive imprint. The products crystalize on the surface of the fiber before the permeation of the fiber by the metallic ions.

In June 2007 the monastery of Secu, Neamţ county, hosted the ceremonial exhumation of the remains of Metropolitan Varlaam, in view of the formal proclamation of his sanctification. The archaeological excavations carried out on the occasion uncovered several fragments of textile material dated in the 17th century (fig. 2). The above fragments were included in a rigid conglomerate of earth and various compounds, in which the corrosion compounds of copper had a significant presence.

The investigation under the stereomicroscope outlined the structural elements of the textile material – cloth consisting of simple threads and threads of textile core with twisted around metal ribbon (fig.3, 5).

The first stage of research, the X-ray fluorescence outlined the elements specific to the soil in which the find was laying (Ca, K, Ba, Cr, Fe, Zn, Zr, Ba etc.) as well as the metals that produced the pseudomorph replacement (Cu, Ag) (fig. 4).

The textile material is in the form of complete pseudomorph substitution, produced in the underground environment as a result of the interaction between the textile fibers and the copper/silver in the metal foil. The metallic ions permeated the fiber, interacting with the organic matrix. New linkage cores were produced through this mechanism, allowing thus other ions to fixate inside the fiber. In this way, the corrosion compounds replaced progressively the organic matrix of the fiber, forming a replica of the textile material, mostly made of copper corrosion products (fig. 5).

The investigation under the Scanning Electron Microscope outlined the structure of the simple threads, made out of tubular fibers, with smooth surface, like the silk fibers. In the case of the threads made of textile core with twisted around metal ribbon, there were outlined various aspects of the corrosion of the metal, as well as the distribution of the component fibers in the cross-section of the thread (fig.7). 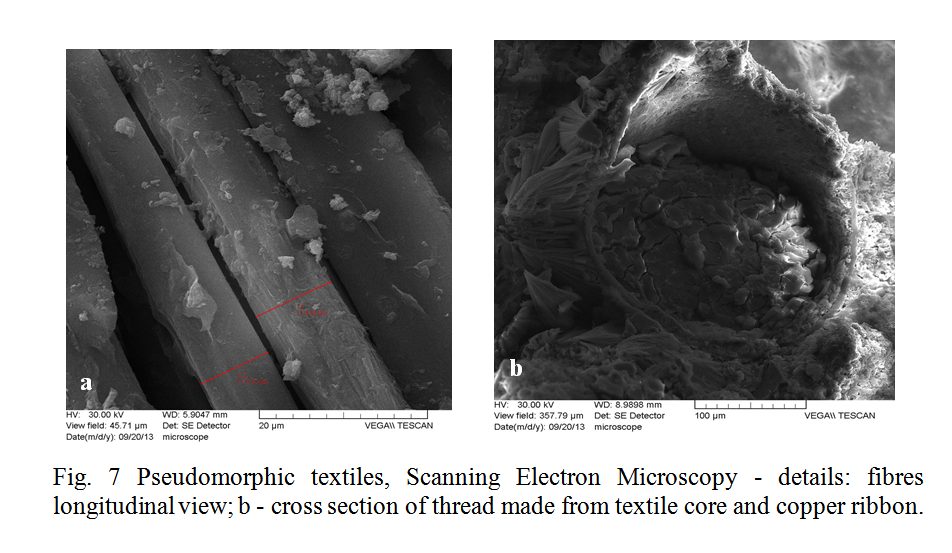 The study of the textiles uncovered in the archaeological sites provides important information for the understanding of the culture and the technology of the peoples that created and used them. However, this research is limited due to the small number of textile artifacts resisting the agents of degradation active in archaeological contexts. In such conditions, the study of the textiles may be carried out by investigating the pseudomorph substitutes formed by the replacement of the organic component in the textile structure by inorganic compounds produced by the associated metallic artifacts. These pseudomorph formations preserve the shape of the fibers, threads and cloth. The existence of the pseudomorph textiles is particularly significant in the cases of historical period of geographic region that lack other evidence of the textile arts.